Listen carefully (I shall say this only once) 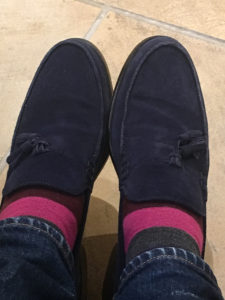 I play in a band, sometimes. Clogiron. We only do two or three gigs a year: fund-raisers, parties and such-like; and we play stuff Dads can dance to.

It’s terrific. Get together with a bunch of mates, strap on the Telecaster, turn it up loud, and pretend to be 17 all over again.

We’ve been learning new material. One is Tiger Feet, a 1974 hit for Mud that cropped up again more recently on the soundtrack of Early Man. It’s dead catchy, a real floor-filler. And it seems to accelerate toward the end.

It doesn’t actually speed up, though. So how?

Though clever editing (which I’d guess came from Chapman & Chinn, the producers).

As changes go, quite subtle. But they stoke the pace and energy right up. And you don’t notice them until you take the song apart to learn it.

There are similar tricks in Back of my Hand by the Jags and Maria by Blondie.

Not something I’ve yet used my own song-writing, but the idea’s tucked away in the toolbox for when I might need it.

Exit Pursued by a Bear

My latest album is now available! Click the image to find out more.

Latest from the blog…